SPEAKING TRUTH, SETTING BOUNDARIES, AND INSPIRING SOCIAL CHANGE
By Cristien Storm
ABOUT THIS BOOK
Strengthen relationships, build more resilient communities, and develop a stronger emotional toolbox.
Explaining power and privilege and the links between individual safety and community safety, Cristien Storm shows readers how to set emotional boundaries that build vibrant social movements and a better world for all. As there have been increases in violence against women, people of color, immigrants, and LGBTQI-identified people, there has been a corresponding demand for individual and community self-defense, boundary setting, and bystander trainings. Boundary setting can be used not just as a means for personal safety but as form of solidarity, resistance, and inspiration. From saying no to a boss who always asks you to work late, to setting a boundary with a loved one, to navigating an uncomfortable situation at the bus stop, Cristien Storm offers a new approach to verbal boundary setting that is accessible for all bodies and identities. Practical in scope, the book includes tools, tips, and strategies from Storm’s decades of experience leading boundary-setting workshops. Grounded in resiliency and trauma-informed theory, Storm pays particular attention to the experiences of women, people of color, immigrants, and LQBTQI-identified people, making this necessary reading for anyone looking to create healthier relationships and build stronger communities.
PRAISE

Storm emphasizes the nature of boundary setting, particularly among vulnerable groups such as people of color, immigrants, the LGBTQ community, and women, defining along the way topics of power and privilege and the connections between individual and community safety. She further examines the fear behind and avoidance of communicating one’s needs and then offers methods for establishing boundaries … with everyone from family members and bosses to strangers at the bus stop. Highly recommended.”
—Library Journal (starred review) 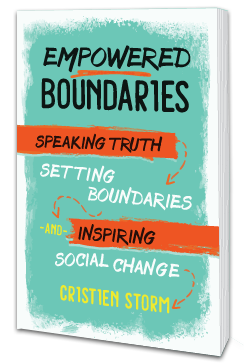 Cristien Storm is a writer, activist and politicized mental health therapist.
Her writing has appeared in Synapse, Steelhead, Pandemonium, Media Cake and Against The Current Magazines, has been included in two documentaries Political Playhouse and Live At The Puss Puss Café: Women Against Domestic Violence, and her poetry and spoken word have been included on recordings The Art Of Self Defense, Heart Of A Dog, Stop Rape Now!, and Power Flush. She has been interviewed for two internationally acclaimed books, Lips, Tits, Hits, Power? Pop Culture and Feminism By Anteee Baldauf and Katharina Weingartner and Cunt! A Declaration of Independence by Inga Muscio. Cristien has been fortunate enough to have the opportunity to perform with artists including Michael Franti Joan Jett, Exene Cervenka, Lydia Lunch, Rebecca Walker and Michele Tea. Cristien is a co-founder and former Executive Director of Home Alive, where she developed and facilitated self-defense and boundary setting curricula rooted in traditional marital arts, social justice, and anti-oppression sensibilities. Cristien has been a featured speaker at numerous domestic violence and sexual assault conferences. She was a featured panelist on a three-week European human rights speakers tour on gender and sexism in progressive social movements entitled “Culture War” for anti-fascist organizers where she collaborated with local organizers to develop and present self-defense and boundary setting trainings addressing sexism, transphobia, and heterosexism in social justice movements.Cristien is also a co-founder of If You Don’t They Will a northwest collaboration that provides concrete and creative tools for countering white nationalism through a cultural lens.
Projects
Copyright © 2018 - 2022 Empowered Boundaries by Cristien Storm | site design & maintenance worthen creative